Nathaniel was due July 5th. I was very surprised and scared when I woke up the night of June 24-25 with bright red blood and pain. I woke Darryl up and even called the doctor about the blood. All my labors had been relatively similar and this was completely different! We even timed some contractions and they were about 5 minutes apart for an hour, and some painful enough that I had to breathe through them. We hadn’t even packed a hospital bag yet, but we did so quickly and debated whether we should go to the hospital. But eventually the contractions subsided and we got back to sleep. The next day (Tuesday the 25th) I decided to really take it easy. A woman in our ward took the kids for the morning. I felt fine, just very pregnant.

But, the next night the same thing happened. The thought of one or two weeks of nights like that did not sound pleasant. I had begun to wrap my head around the idea that the baby was coming early! The next day (Wednesday the 26th) I had a doctor appointment. I was anxious to see what she said. I was 4 cm dilated, and she stripped my membranes. The doctor was our bishop’s wife, and she said I could have the baby any time. And, if I didn’t go into labor by Friday, she could induce me. I was having irregular, not very painful contractions throughout the day.

Meanwhile Darryl had a doctor appointment the same day, at about the same time – It had been 4 ½ weeks since he broke his neck. He came home from his appointment without the neck brace. My parents had helped with driving to the appointments and once we were all back home, they left.

Soon after they left, the contractions picked up and got stronger and closer. We decided this was the real thing, so we called my parents back to come and get the kids. This was such a different experience from my other labors. Each time I had gone into labor at night, and it was strange to be walking around and breathing through contractions with all the kids there!

This picture is just a few minutes before we left for the hospital. 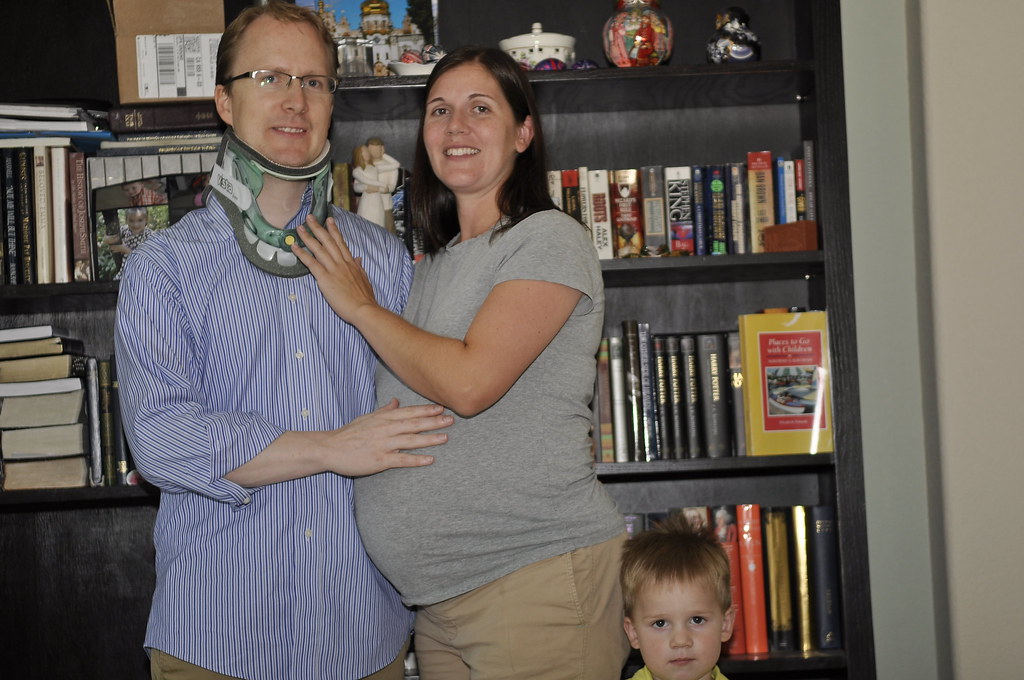 Since Darryl wasn’t driving yet due to his broken neck, and I didn’t want to drive while in labor, we called a friend to take us to the hospital. We got checked in and the contractions slowly progressed. I knew I would want an epidural and asked for that after a little while. I think I was at about a 6 or 7? The anesthesiologist came in and started explaining everything to us. We detected an accent and asked where he was from. He said Ukraine! Darryl spoke to him briefly in Russian and he was so excited he went out afterward and told his coworkers. After a bit, the epidural was in and working, but as in times past, the labor kind of stopped progressing. It was the late afternoon/early evening. I really wanted the baby to be born that day, the 26th and not the 27th. I have a thing about not liking odd numbers – especially the anniversary of the death of Joseph Smith!

They asked if I wanted some pitocin and I said yes. They put it in and we waited to see what happened. After a bit I started feeling some major pressure and called the nurse in. She leisurely said she would check me to see, and suddenly said, “you’re ready!” There was a flurry of activity as she ran to get the doctor. When everyone was ready I did a couple of pushes and the baby literally slid out. It was an interesting sensation. Since he was earlier than my other babies, he was the smallest. I think that is why I felt like he just slid out so easily – he was over a pound smaller than Michael. I saw the baby and fell in love.

They tried to place him on my chest, but then for some reason put him lower down on my abdomen while the cord was cut. I later found out that the umbilical cord was unusually short and that was the reason he was not on my chest. At this point, we heard a sharp and brief attempt at a cry. And then after another moment I wondered why he hadn’t taken a breath and why we hadn’t heard more of a cry. There was a breathing specialist or something in the room and Nathaniel was immediately taken over to him. There were 2 or 3 people massaging him, while the doctor used an oxygen bag to try and help him breathe. After a few more minutes, they decided to use a laryngeal mask airway (LMA), which is essentially a tube inserted part way down his trachea to keep his airway open. I looked over and saw his lungs and whole body laboring as hard as they could to get a breath. He was breathing but the doctors said it was taking an enormous amount of energy and he would tire very quickly. It was one of the scariest things to see this little guy literally fighting for every breath and fighting to stay alive. It was also awe inspiring to see the instinctive nature of a newborn able to figure out his body within minutes of being born, even in the face of such difficulty. At that time, Darryl and I felt a calmness waft over and comfort us, assuring us that things would be okay. Looking back over this experience, we recognize there must have been angels in that room as we really should have been basket cases. After just a few minutes the doctor took him out of the room to the nursery where they could help him more. Once I was fixed up and resting, Darryl left to be with the baby. He also called my dad so they could give him a blessing. Darryl blessed him that he would be able to breathe easily soon and that the doctors would swiftly be able to diagnose his problems. He blessed him that he would not feel lonely and would be able to feel the love of his parents and family, even if they were not physically present. It was a short blessing, but gave us further comfort that he would be okay. 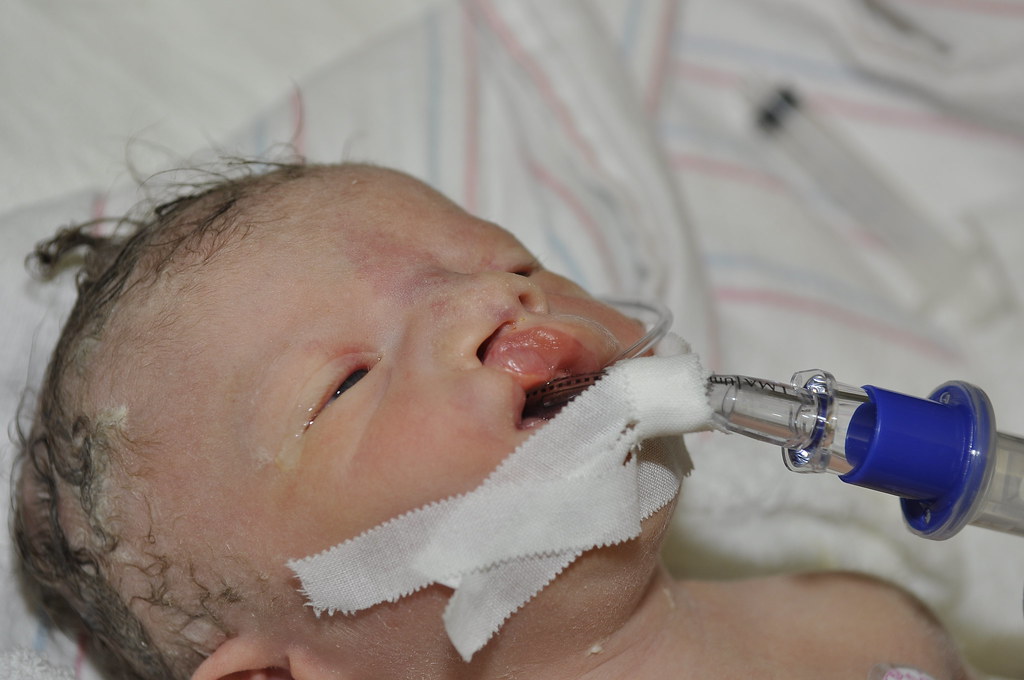 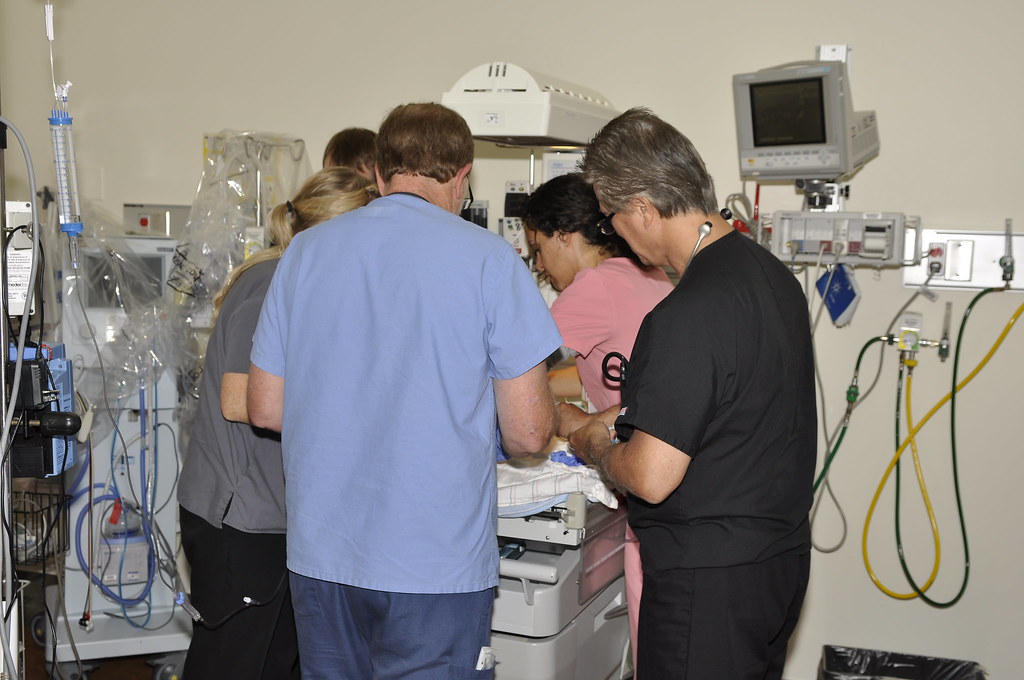 I was then all alone in the room, on and off with a nurse. What a weird thing. I had just had a baby and neither the baby nor my husband were with me. Again, I was much more calm than I should have been. My dad came and sat with me for awhile, and Darryl came in for updates. They determined they would need to put him on a ventilator as breathing in this manor was exhausting his strength. The hospital didn’t have a neonatal intensive care unit (NICU) so they were calling around to NICUs in the area. After a couple of hours, his “transport team” came and Nathaniel was sent to Sutter Memorial Hospital (incidentally, the hospital where I was born). 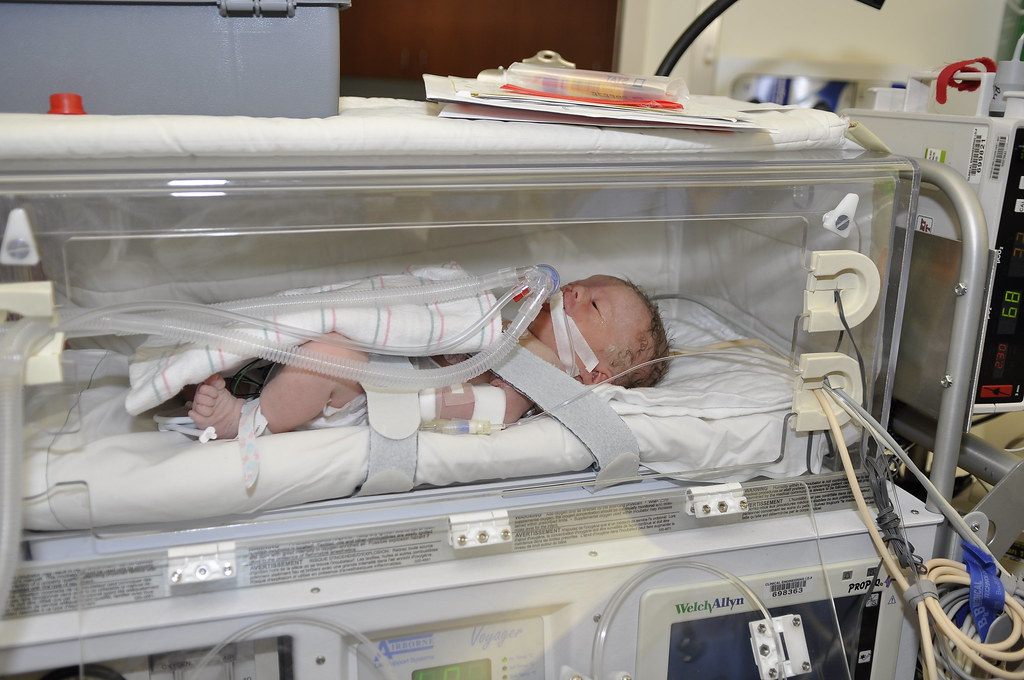 The transport team wheeled Nathaniel into my room before they left. I got to see him and touch him (but not hold – there were too many things going on). I didn’t want to linger with him – I wanted him to go and get taken care of so he would be okay! Darryl stayed the night with me in the hospital. It was strange to hear crying babies from the other rooms and my room to be so quiet. I wasn’t in labor, and I didn’t have a baby. It felt so strange.

The next day, I had a couple nurse and doctors visits and they said there was really no medical reason for me to have to stay. Darryl and I packed up our stuff and headed home in the early afternoon. Unfortunately, with everything going on, we were unable to visit Nathaniel. I was not ready to travel and Darryl still couldn’t drive. Also, we were just exhausted physically and mentally to make the trip down to Sutter Memorial. We had several phone updates and knew Nathaniel was under the best care in the area.

Although we felt a strong sense that he would be okay, the thought of him being only a few hours old, alone and far away from his mommy and daddy, trapped in a NICU capsule with no one to hold him and comfort him, left us with a certain emptiness in our heart and sorrow and for quite some time we just held each other and wept for our little baby boy.